The panel bearing the Royal Coat of Arms was originally the property of the Cowdray Estate and was loaned to the Midhurst Town Trust for use in the Old Town Hall’s Court Room. In 1939 when the new Courthouse was built in Grange Road, the panel was re-located along with a gilt device, and positioned behind the Bench which originally came from the old County Court.

The Coat of Arms display quarterings as follows: 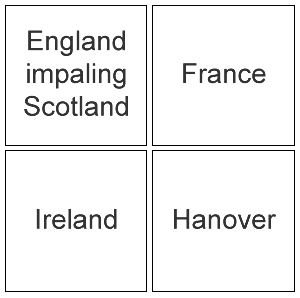 These were in use between 1714 and 1801 when the union of the Irish and Westminster Parliaments necessitated new arms and the claim to the throne of France was dropped. Thus, although the wood panel is dated 1816, this has been painted over the date “1754” which is still discernible beneath. The unknown artist discloses his sense of humour with some mischievous touches; for example the cherubs’ heads are believed to be cartoons of local Justices. The heraldry incorporates some amusing and probably unintentional mistakes; for example the Royal mantling should be gold and ermine and not red and ermine; the helmet itself is steel with gold bars as for an ordinary Peer, whereas the Royal helm should be all gold. The harp strings of Ireland should be silver not black.

The above information is contained in a document which accompanies The Coat of Arms.

The Coat of Arms was restored in 1981 with assistance of a donation from Lord Cowdray and Chichester District Council. When the Court House closed, the wooden panel was moved to Capron House and it is believed that the other device was taken to Petworth.
Lord Cowdray presented the Royal Coat of Arms to the Trust. It was resolved that a letter of thanks be written to Lord Cowdray and he suggested that a letter should also be written to the estates office with a request that if there were any records in the office with regard to the Coat of Arms, that the same should be handed over to the Trustees.